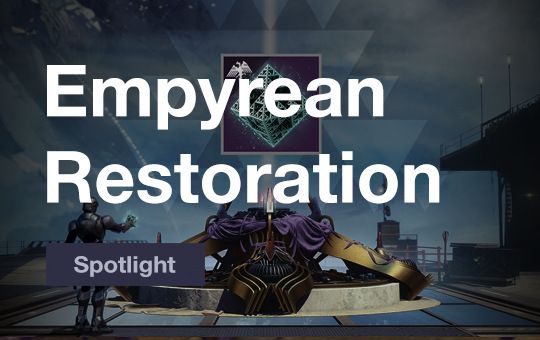 Empyrean Restoration is a unique seasonal event that every player can take part in. In this post you can find all the important information. It's ShineBoost, let's go! What is this all about?

Empyrean Restoration began on February 4. It will continue until the end of the Dawn season. In fact, this event is the collection and delivery of resources (fractaline) to build the Empyrean Foundation, which should become the link between this season and the next.

In fact, we are reviving the Tests of Osiris — PvP mode from the original Destiny, which migrated to the sequel as Trials of Nine. Unfortunately (or fortunately) the they were removed in the first year of Destiny 2. And now it’s time to return the PvP mode, which allowed Destiny 1 to survive until the release of the second part. The developers could simply return the Trials without any announcement (in fact the announcement has not yet happened), but Bungie decided to devote a whole separate event to this event. Each player, whether he wants it or not, contributes. Until the end of the season, the Sentinels must contribute an incredible amount of fractaline to the obelisk of the Tower. There are 7 steps:

The process of passing is displayed in the game in two ways: Projection in the obelisk of the Tower Players contribute in a simple way. You need to go to the obelisk of the Tower and squeeze the right button, which will give 100 units of fractal to the Empyrean Restoration. After passing through stage 7, the players should be available to a new mission [PROBABLY]. In addition, all participants will receive a unique shader (Lighthouse Sun) and the title “Savior” if all other requirements have been met.

For contributing to 5000 fractaline players will receive a unique emblem and the Triumph.

How the tower obelisk works

The Tower Obelisk is a key link in Empyrean Restoration. It displays the following indicators:

1) The amount of fractal introduced into the Empyrean Foundation

Everything is extremely simple. How much has contributed – so much and shows. One application costs 100 fractaline.

The guardian can use this fractaline as he pleases. He can spend it on fulfilling timeless contracts, he can invest in planetary obelisks (to increase the resonance level of the Tower obelisk, so that he can get even more fractaline next week), or he can immediately invest it in Empyrean Restoration. Speaking of timeless contracts, the Empyrean Restoration allows players to execute contracts without flying out of the Tower. Each investment in Empyrean Restoration (100 fractalines) gives 25% to the progress of all timeless contracts in the player’s inventory. In other words: took 4 contracts, 4 times put fractaline into the Tower, completed 4 contracts. And so around. A great opportunity to get the perfect rolls, isn’t it?

As far as we know, absolutely all Saint-14 seasonal assignments must be completed (this does not include exotic quests).

There are several easy ways:

2) Do Saint-14 daily contracts. Every day 4 contracts are available, each of which gives 50 fractaline. 200 fractaline per day per character, 600 per day for three. It turns out 4200 per week.

3) 10 fractaline for the completion of the Sundial.

Suppose, if you invest all the accumulated fractaline from contracts (2400 + 4200 = 6600), then with a weekly reset you will receive 3300 units of fractaline back. During the event, everything will turn out in such a way that you will be in the black.

There is another way to increase the level of resonance – buying a special item in the obelisk of the Tower, which costs 20,000 glitter and 10 legendary fragments. This thing will instantly increase the level of any planetary obelisk. The quantity is not limited.