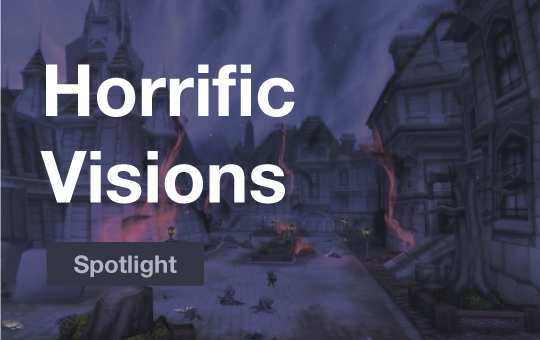 If you liked the Mage Tower in Legion, then World of Warcraft patch 8.3’s Horrific Visions is content that is designed to appeal to you — it’s content you can do solo or in a small group (up to five players) and it’s designed to start off with ramping difficulty that will eventually force you out until you get better at the encounters and better geared to resist the sanity draining mechanic of the Vision. This means you can treat Horrific Visions as something to return to and progress further in, rather than expecting to blast through to the end the first time you run one. But how do you get started?

First you face the Assault

In order to get yourself started with Horrific Visions, first you have to face the Black Empire by Assaulting it head-on. In patch 8.3, the forces of N’Zoth invade two zones on Azeroth — either Uldum or the Vale of Eternal Blossoms will be under attack. Horrific Visions are unlocked after completing the entirety of the Visions of N’zoth questline from Wrathion up to the raid quest, Ny’alotha, the Waking City: The Corruptor’s End. Then, once you’ve done that, you’ll want to run the Assaults to get Coalescing Visions, a necessary currency not only to upgrade your legendary cloak but also to buy the Vessel of Horrific Visions.

The Vessel is the way into the Horrific Vision (think of it kind of like a Mythic + key) and it costs 10,000 Coalescing Visions per Vessel. There’s about 30,000 possible Coalescing Visions you can earn per week, with 10,000 from a Major Assault and 5,000 from the smaller Minor Assaults, plus the Mini-Visions that grant 2,000 for the first one every week and another 1,000 for the daily quest. Combined with Daily Quests which offer 50 Visions, up to 6 per day — for 300 daily, or 2100 a week — you can earn enough to run two or three Horrific Visions per week.

Even if you’re not down for all the time investment needed to earn around 30,000, you could by simply doing the Major and Minor Invasions offered during the week earn 15,000, which would mean that in four weeks you’d earn enough Coalescing Visions to run 6 Horrific Visions. If you do the Mini Visions and other daily quests, you can run twelve or so Horrific Visions a month. 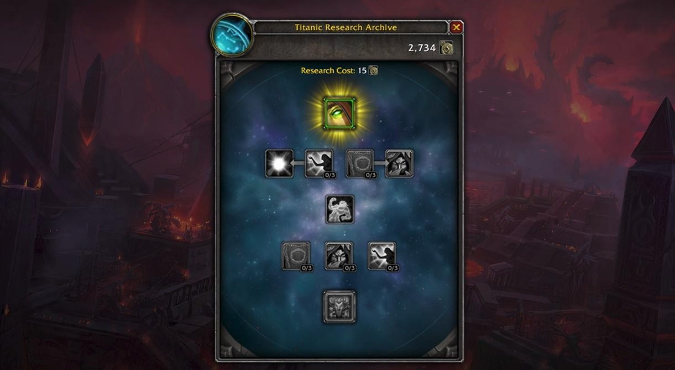 Now, at first, you’re not going to get that far in the Visions. They’re designed that way — deleterious effects and the sanity drain of N’Zoth being, you know, an actual Old God will make it so you have to retreat before you get to the end. This means that you’ll be spending your Coalescing Visions more and more on further attempts. But there are ways around this. As you progress further in the Vision, you’ll be buffing your Legendary Cloak, which will therefore protect you more from the Sanity effect and allow you to progress further.

So the more Visions you do, the more you can do in a Vision. Also, as you enter and leave the Visions, you’ll be collecting fragments of the corruption of N’Zoth, the — Corrupted Mementos — and bringing them to MOTHER and Magni Bronzebeard, who will use them and the research the Titans did in Uldir on the Old Gods to bolster your defenses against the corruption. This will allow you to resist the Sanity drain longer and progress further. You can earn between 100 and 6000 Corrupted Mementos depending on how many objectives you complete, so as you get better you’ll earn more and be able to spend more Mementos on Titan Research to increase your time to complete more objectives.

Your goal in Horrific Visions is to complete certain objectives while inside the vision. There are a total of 5 objectives per vision that you should aim to complete. There is a “Main Objective” of the vision, and then there are 4 “Bonus Objectives”. 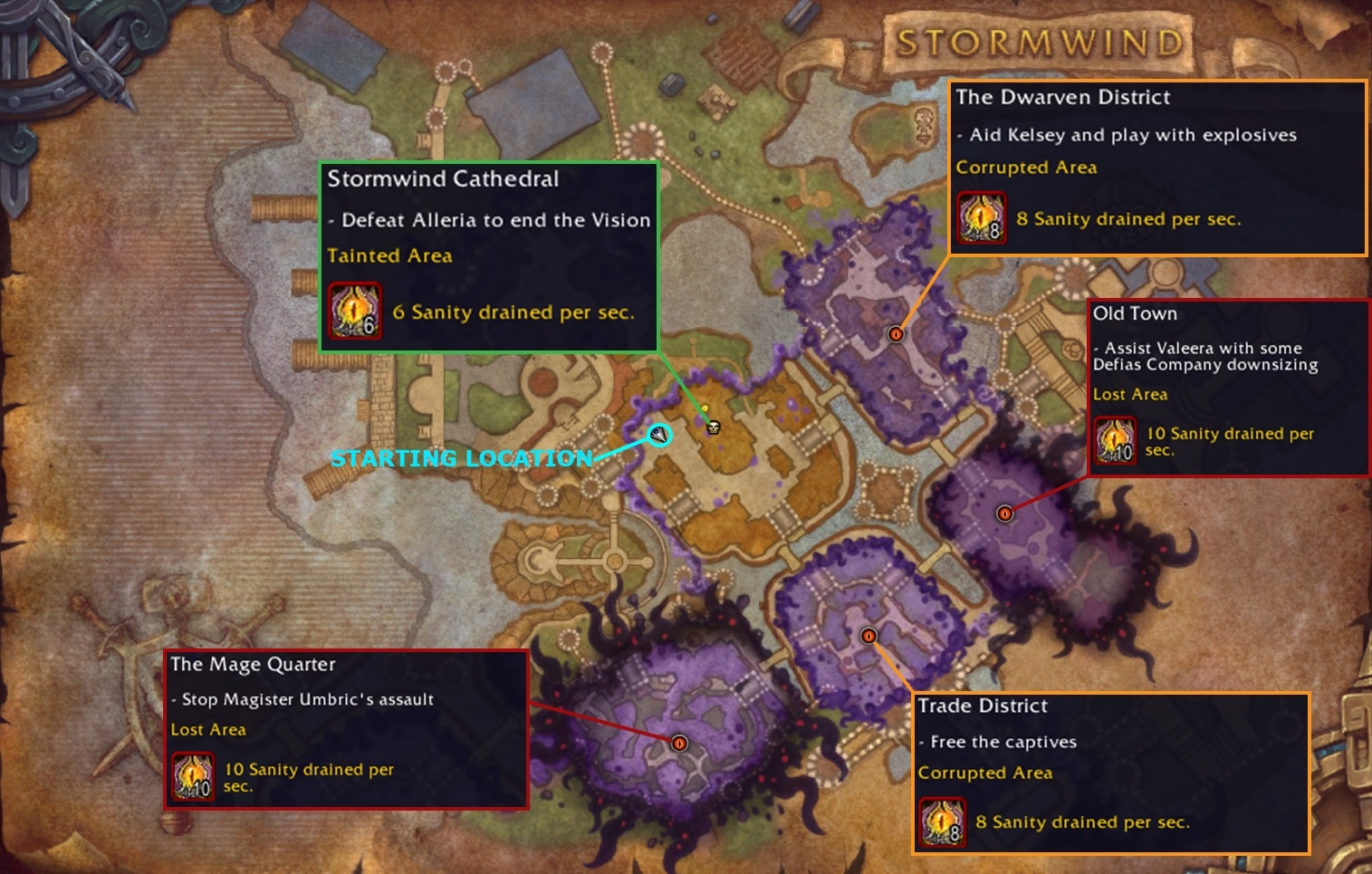 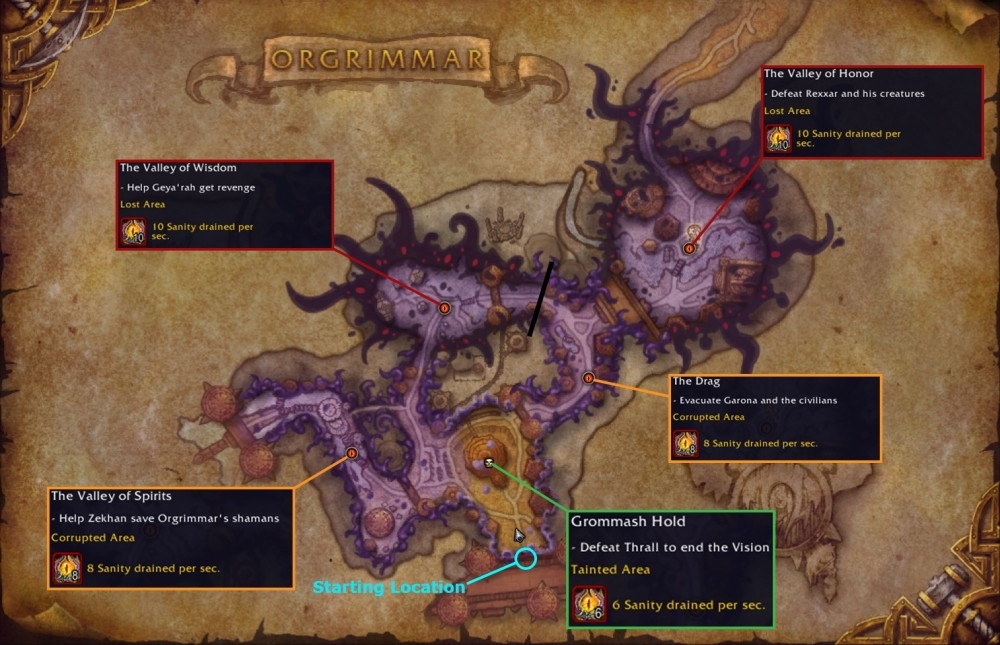 It’s important to know that your Sanity is your time limit and that you won’t be able to complete all objectives until you have some upgrades that provide you resistance against Sanity draining effects or provide opportunities to restore sanity. 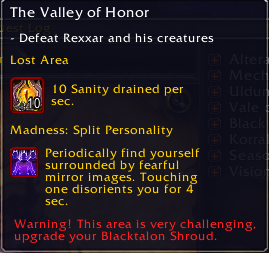 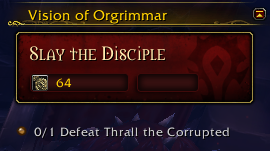 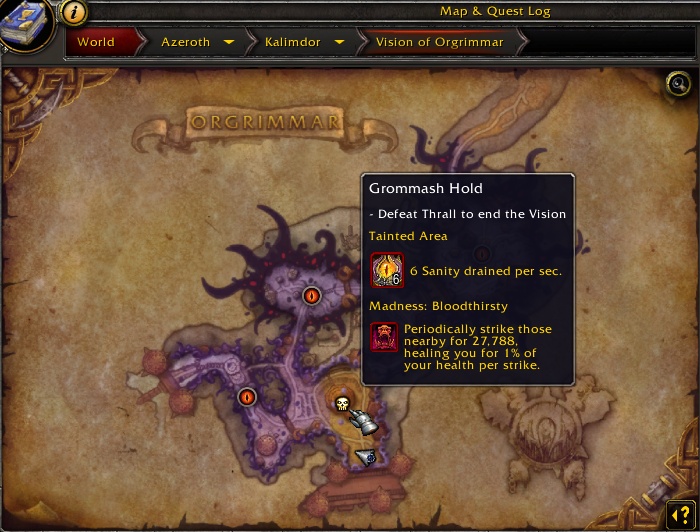 Players are free to venture out beyond the starting area and into the other sections of the city. There are 4 additional sections to the city, each with an objective. However, each of these areas has a higher passive Sanity drain, more deadly enemies with higher health, and Madnesses that are more relevant. 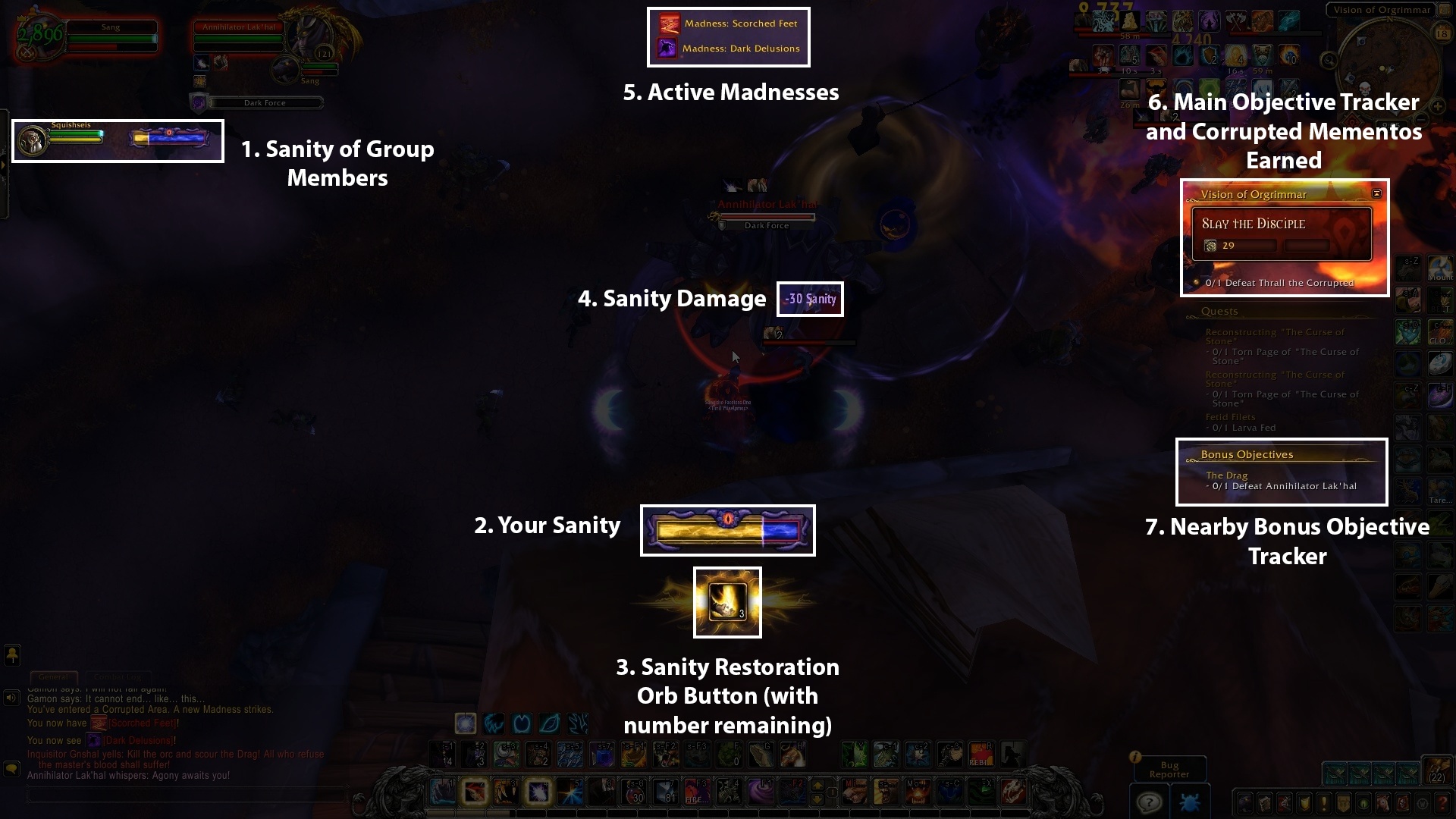 How to face the madness

So, how do you go about actually doing this content? Well, for starters, you and everyone doing the Horrific Vision with you, if anyone is has to have a Vessel of Horrific Visions in your inventory. You will go to the Heart chamber in Silithus, where the portal into the Vision is sort of hanging out next to MOTHER. There’s no specific iLevel requirement for this content. While going in with less powerful gear will likely mean you won’t get as far, there’s nothing specifically stopping you from doing it as soon as you finish the patch 8.3 introductory questline and get enough Coalescing Visions to buy a Vessel.

What do you get for your time? Well, if you defeat the main objective boss for the Vision, you’ll get ilevel 420 gear. As you progress, defeating more objectives and unlocking higher difficulty levels, you’ll start to see ilevel 445 gear, with the most challenging level of difficulty in a Horrific Vision allowing you to earn ilevel 470 gear, on par with Mythic + 15 and just below Mythic raid difficulty. You won’t be swimming in this gear right away — you’ll need to start completing all of the objectives in a Vision before you see that 445 gear, and it’s one piece per finished Vision, because you have to beat the main objective boss to get an item.

The items come from the various patch 8.3 ‘pre-raid’ sets. Clothies will get pieces from the Vile Manipulator set, the leather set is the Insatiable Maw, mail wearers can look forward to the Nefarious Tormentor set, and plate classes will get pieces of the Malignant Leviathan gear. One thing to keep in mind when running Horrific Visions is that there are built in gear diminishing returns set up, so if you do a run and complete four out of five objectives and then do another run that same week and again complete four out of five, you won’t get the same level gear — it’ll be slightly worse, to encourage you to do better than you did last time for better rewards.

So there you have it. Farm Assaults and other content to earn Coalesced Visions to buy Vessels of Horrific Visions and use those to run the Vision, alone or in a group of up to five players. The Vision will scale for your group — there’s no minimum ilevel but trust us, you’re going to get wrecked unless you’re around 400 or so to start — and don’t expect to clear the whole deal your first time through. Find the easiest objective, get some Corrupted Mementos, and get out before you die from losing Sanity for your first few Visions. This is content you’ll need to ramp up to full clears.